For discussion of Lunar: Eternal Blue, the remake of Lunar 2 for Saturn/Playstation and all its translations
Post Reply
16 posts • Page 1 of 1

I've been working on cleaning up screencaps of the cutscenes in the Lunar 2 remake so I figured I'd do some more animation errors. I have to choose my battles on this one. It's a more streamlined production, (so fewer painting errors,) but the artists involved aren't as skilled as the last time around. I could claim that ALL of the cutscenes are off-model.

First, a continuity error. The animators decided to give Lucia her pendant even in the intro, (on SCD she doesn't have it before she appears in the Blue Spire,) but forget about it when she's standing out in the snow a few scenes later.

Next, Lemina, where are your clothes?? 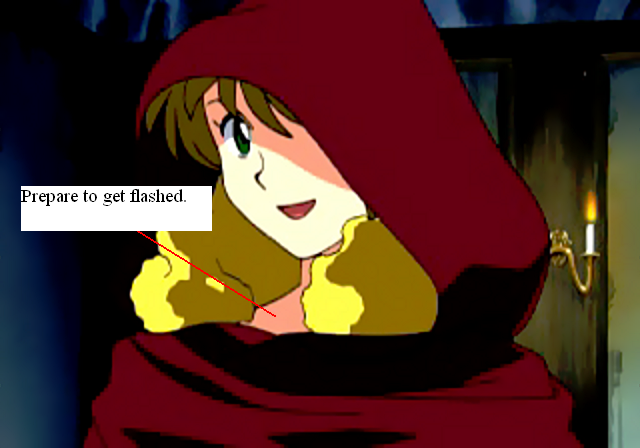 Apparently Lemina magically summoned her normal outfit while she was dramatically taking off that cloak, because if she had it on the whole time we wouldn't be able to see that much bare shoulder.

You may also be wondering, Lemina, where is your eye?? I dunno, the animators didn't really care?
「まあいいけど。」
Top

Heh, I remember reading about the disappearing pendant on either the WDMB or the letters section of WD's site. No one at WD had noticed until it was pointed out -- not that the error itself had anything to do with WD, but it amuses me that it wasn't noticed in the time they worked on the game. But then, I didn't catch it either.

Is it just me or does Lucia's ear look really low in that second pic? Seems like she'd have a hard time wearing glasses.
Top

Lemina's magic also lets her summon her second eye after she's done being the creepy old crone that might flash you.
Sonic#

That Lemina is such a tease. I was so disappointed by the remainder of that scene... KF
~Kizyr

Here I go again with a painting error. Sadly, it's not very funny. It's just a screw up. Lucia's robe is black in a spot where it should be red. 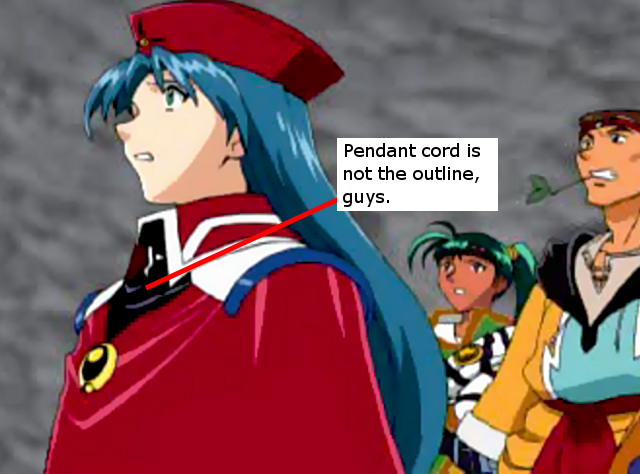 This was bugging the hell out of me when I was processing stills from this scene. All of the hand drawn Destiny backgrounds that show up late in the game are neon-bright. Normally the contrast and color saturation on the other elements are through the roof so it's not a problem. Not this time, though. 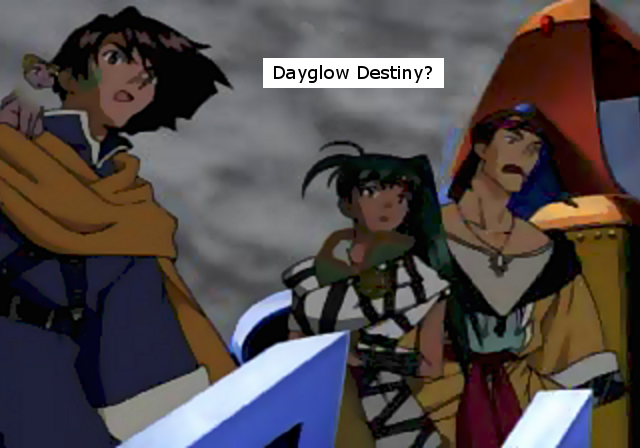 This time the dayglow Destiny is paired with gray clouds and annoyingly dark, muted palette choices for the character art. I'd ask who screwed up more, but it's another useless question.
「まあいいけど。」
Top

I think the muted character art works for that scene though; the clouds are blocking out the sunlight. Reminiscent of the land growing dark in TSS, actually. But yes, that makes the Destiny stick out even more.
Top

Right, Alunissage - I don't think the problem is that the characters are dark, but rather that the Destiny is luminescent. Though I guess you could make some argument that it's emitting light because it still has the power of Althena. I probably wouldn't.

I think I had noticed the issue with Lucia's shirt, but I hadn't thought much about it, and it's been years since I've seen the scene. I guess at the time I chalked it up to an extremely neat shadow. Seeing it like this... *facepalm*.
Sonic#

I agree that the dark color palette is appropriate for that scene, but I think the animators went overboard with it. Just like they go overboard with bright colors in the rest of the game. At least they're consistent...

Double post! A nice, straightforward case of being off model - that hair's about waist-length, I'd say, but it's supposed to be hip-length. (Lucia's hair is even longer on Sega CD, about knee-length. ^_^) 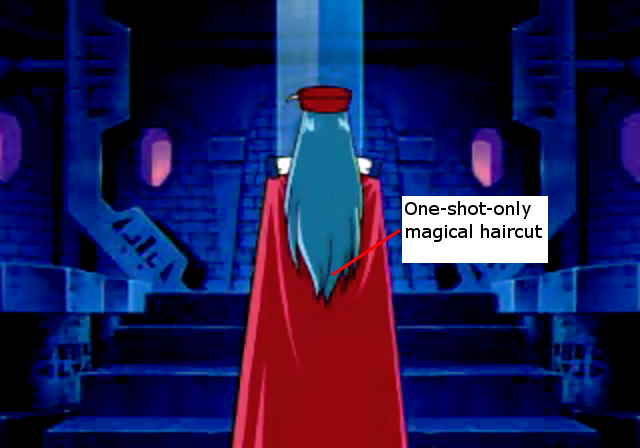 Seems to me like that's the only scene the animators realized that her character design really is absurd. That hair billowing like a flag in the opening always bugged me; as someone with rather long straight hair myself I can say that in my experience hair doesn't do that. The hair in the above pic at least looks like it could belong to an actual person.
Top

I never noticed any of these! O_O

It was in the Saturn version as well. It was added for the remake, but not specifically the Playstation.
Top

EBC in general has some...issues with eye placement. Lucia seems to be the biggest victim of it. Poor girl just can't get a break. She looks like the goddess of special needs kids, not the one tasked with reviving the Blue Star.

TBH, I wouldn't mind if they completely redid the animation in a new remake. I know that could mean risking things like moe Lucia, but I'd rather take than mentally disabled-looking Lucia.
Top

Well, she isn't human, after all.

I have to take issue with the casual use of "special needs" and "mentally disabled" (as if the latter would necessarily correspond to a physical abnormality). Please don't do that, even in the context of discussing clear errors in portrayal of a fictional character. People who look different (including skin color) have enough trouble without being classed as mentally deficient (which is the usual implication of phrases like these) based on their appearance, and people who are mentally disabled are still people who don't deserve to be othered and used as a synonym for lesser-than, not-like-us. It's not so long ago that I would have been diagnosed with "minimal brain dysfunction" rather than ADD...if I'd been diagnosed at all, which I probably wouldn't have been.