For discussion of Lunar: Eternal Blue, the remake of Lunar 2 for Saturn/Playstation and all its translations
Post Reply
41 posts 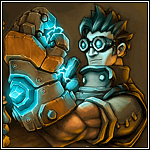 Check it out and download away here. I'll be monitoring my bandwidth while these are up... if you can share these files through some kind of software with friends, so much the better.
Top

I've wanted a full soundtrack ever since I picked up a bootleg of that other vaguely arranged one. You have done us an excellent service - .oggs even!
「まあいいけど。」
Top

That's awesome! I have not experienced the Saturn version of EBC, so I totally want to go compare it to the Sega CD and PlayStation music now! The more music variations, the better.

(I've converted all the Sega CD music and voice clips if anyone wants it; The PlayStation soundtrack is already available over at zophar.net. I might be able to mirror the Saturn music in a few days if it would help.)
Top

*blinks* Hi, Parn. Haven't seen you around in a while, but then, I don't think I've looked anywhere I'd expect you to be. Thanks for doing this and making it available! I started playing the Saturn game specifically for the music, but I forget how far I got.

This may be an obvious question, but where are the names from? It's been quite a while since I played the game, in any language.
Top

Hey, thanks for posting those! I've ripped them a few times as well, but always seem to find them deleted when I really want them. BTW, nice to see you on the boards Parn! Feel free to stick around if you want!
-G1
Top

Mirroring the music would be very awesome. If you get it up, let me know and I'll link away to it.

And hello Alunissage. Definitely been a long time. The song names are a mixture of stuff that Working Designs used for the sound test in the PlayStation release, a few names from the original Lunar Eternal Blue OST, as well as some of my own.

Bravo, Parn, these are great! The instrumentation really is notably better, especially the violins...that was the key failing of the PS rendititons of Mega CD songs, and I'm really grateful to have these. If you care for Iwadare's official song titles out of the Ocarina from the Japanese version, I have them thanks to the LunarHope board folk, who saved me the trouble, though you may be content with the US ones. Either way, thanks much!
Top

No problem. And on that note, there are segments where the PlayStation release had stuff cut out of the music. For instance, compare both consoles' version of Blessed City/Town (the music that plays in towns like Dalton). The music is basically comprised of three parts in the Saturn version, the first segment featuring a violin hitting mostly low notes, followed by a second part where the violin hits some higher notes, and lastly a segment sans violin. The PlayStation version plays the first segment twice, then hits that third segment, skipping the second segment entirely. There's other similar cuts in a few other songs.

As for the track names, I think I'll be alright, but thanks just the same. Renaming would mean reuploading everything and editing... heh.
Top

Heh, no surprise about the segment skipping...Iwadare's great score took such a pummeling on the PS remake (despite extended song versions), after all. I's a shame they didn't bother to do better on the PS than the embarrassing "violins" that feature so strongly in Zophar's Arrival and Footsteps of the Decisive Battle...it's a relief to hear them normally in the Saturn versions. I noticed that the second half of Jean's theme (the part that loops after the initial minute or so) didn't seem to be present. Was it absent in the Saturn version, do you suppose?
aka Maou
Top

Indeed, the second half was never in the game. I guess that's one thing the Saturn version lacked.
Top

I'm not exactly tech savy or anything, but how exactly do you play a .ogg file? I've never even seen that file extension before.

Full version of Winamp will play .ogg files and just about everything else around. Ogg Vorbis is an open source audio codec that is free for use by anyone and is actually used by some game developers. I use Ogg Vorbis over MP3 because there are some CDs where the audio does not stop from one track to another, and because MP3 does not support gapless track transition, you get a little "blip" as it transitions from one track to the next. You don't notice this with 99% of the MP3s out there because most songs fade out before the track ends. So that's basically my reasoning for choosing the format. The alternative was Musepack, which has considerably less software support.

Ub3r. Thanks a lot, I was afraid of the heart attack I might have suffered for not being able to play these music file thingies. I'm sure everyone here appreciates the time spent on ripping these suckers. *listens to them now*

DevNall or anyone do you know the Codec needed to play those rips?
I've probrably been searching a good 6 months looking for the music and have had no luck until I stumbled upon this site!
The music for Lunar is too good not to have!

Some alternatives that will:
Should I just convert these into another format, too?
Top

Yes actually Winamp plays them just fine. You can save your playlist on it like Musicmatch cant you? Theres no music that expresses mood like EBC does. Thanks alot bro!
Top

Check it out and download away here. I'll be monitoring my bandwidth while these are up... if you can share these files through some kind of software with friends, so much the better.

I have been looking for a complete soundtrack of Lunar 2 for awhile.
Top

I didn't play the saturn version, but it sounds different. I downloaded the Tabens peak so far.

Hey Parn, is there anyway you can do the same for SSSC as well? I really enjoyed the music for it but the quality is pretty bad on PSX.
Top

My guess is he can't. He likely used the PCM music ripping tool that worked with EB on the Saturn, and if I recall correctly, SSS had another format.
-G1
Top
Post Reply
41 posts