Why there is no lunar 3?

For discussion of rumors of any new Lunar games, including the nonexistent Lunar 3
Post Reply
17 posts • Page 1 of 1

Why there is no lunar 3?

Nice to see you everybody.
It's my first topic and Let me introduce myself shortly.
I'm from China but now working in Tokyo. I am concerned about Lunarnet for a long time but never joined until now.

Some days ago I found something that I didn't know. And it seems there is no reference about it on Lunarnet. Of course if everybody knows about it, this thread will be meaningless. But I don't think so.

Why I put the topic here is that I think it may be an important reason for there is no lunar 3 until now.
Plz understand English is not my native language. (obviously neither Japanese) So if you can't understand what I say, plz tell me.

I saw there is something about Studio Alex from the introduction of Lunar on Lunarnet.

It says
It(Lunar) was developed by a group that GameArts put together by the name of Studio Alex.

But u can find from wiki that Studio Alex was founded by respected programmer Kazunari Tomi, a former employee of Nihon Falcom.
It says Studio Alex was a company, mainly a consultant company, developed the initial three titles of the Lunar series with Game Arts as a co-developer and publisher.
Thus we can know Studio Alex and Game Arts are two different companies. And some core members of Lunar, like Shigema and Kubooka were once in Studio Alex.

I am not just talking about Studio Alex. What I really want to say is the court case between Studio Alex and Game Arts in 2003, and it was about LUNAR.
U can find the reference from the link. but it is written in Japanese, very formal, not easy to read even for a native speaker.

shortly speaking, Alex Studio and Game Arts shared the license of Lunar.
Lunar Silver Star Story Saturn version, Playstation version, US version, windows version are all based on the original Lunar. They are all derivative works. When producing the Saturn Version, Game Arts made a contract about how much to pay to Studio Alex. But no contract was made when producing other derivative works. So Studio Alex started a lawsuit against Game Arts, contending an infringement of copyright.

In the meantime, Game Arts counterattacked against Studio Alex, contending that Studio Alex didn't finish producing Magic School Lunar Saturn version before the deadline. Therefore Game Arts had to ask other companies for help and spent more money, about 75 million yen. So on the court Game Arts asked Studio Alex to make compensation. The plaintiff was also a defendant and vice versa.

Finally Studio Alex lost and brankrupted soon. Of course there are many details about the court case. We can make more reference if necessary.

Some core members of Lunar were once in Studio Alex. It is very likely there was a plan of Lunar 3. But coz of the court case and the brankrupt of Studio Alex, the group working for Lunar collapsed. I think it is the important reason for there is no Lunar 3 until now.

It seems now only Game Arts has the original lisence since Studio Alex was gone in 2003. But if the game is done by other ppl who are not familiar with Lunar, like you see in DS (except for Kubooka's art work), Lunar won't be Lunar.

From the court case I know another thing. If u have played Magic School, u found the encount rates were deadly high. If there is no this problem, the game will be excellent in storyline. I supposed Studio Alex didn't finish it on time and Game Arts asked other company for help in a hurry, so they caused such chaos.
Top

Welcome to the boards! I had always assumed Studio Alex was a department or development branch of GameArts of some kind. Didn't realize there was a court-battle between the two in 2003. Kind of interested that Lunar DS came along shortly after.
-G1
Top

Thanks for your quick reply. I just think it affected the future of the series.
And I'm sorry I didn't mention clearly. The one in 2003 seems to be the last time that caused Studio Alex's bankruptcy.
From the link it says court-battles were also in heisei 9 nen (1997), heisei 13 nen (2001) and heisei 14 nen (2002).
It seems very complicated.

And suddenly, the reduced quality of the Completes finally makes sense.


They're good games, but nowhere near as excellent as the originals.


Upsetting to know for the most part.


And this even explains why Magical School felt more traditional.

Yeah, it really does make a lot of sense, looking back at the comments Vic has made, and all the rumors. I do also remember Vic making a comment back in like 2000 or so about there being a lot of legal issues when doing anything Lunar related. It also makes sense why Grandia kept getting sequels while Lunar seemed forgotten. Then DS pops up shortly after the Studio Alex is bankrupt.

Though it does mean there is less issues with getting a new Lunar made... still, after DS, they might have given up. Lunar 3 would have been perfect shortly after EBC was released.
-G1
Top

I want to see if I can delve into this more deeply this weekend, but this is seriously fascinating stuff. It certainly explains a lot.

G1, think we should work on putting together an article on this? Tons of props will go to alexhiro, of course. KF
~Kizyr 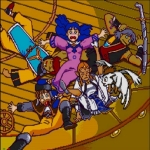 I agree with everyone before me: this explains a lot.

But, aside from knowing all of this... It's kind of depressing! I wish there was a way to start them back up again or something... ._.;
Top

Kizyr wrote:G1, think we should work on putting together an article on this? Tons of props will go to alexhiro, of course. KF

That's what I've thought since I first saw the post. It would make an excellent article in the Lunar 3 section. It really does cast a lot of light on things.
-G1
Top

A good idea to put a perfect article about it.
It casts too many things that puzzled every lunar fan for a long time.
Plz tell me when you need help.

HikariOmoi wrote:I agree with everyone before me: this explains a lot.

But, aside from knowing all of this... It's kind of depressing! I wish there was a way to start them back up again or something... ._.;

Don't feel bad. It's better for us to know, even if it's hard. It's better than hoping and praying and wondering why it hasn't happened yet.
-Nobi
Top

From the official site of Game Arts, four series titles including Lunar are highlighted on the homepage.
So I don't think GA gives up and a new title is possible.
Top

you know what i think i think somone should contact them or somone that can do somthing about this!! we need lunar 3 i just feel like there should be atleast one more game

MagicEmperor wrote:you know what i think i think somone should contact them or somone that can do somthing about this!! we need lunar 3 i just feel like there should be atleast one more game

Just thought you should see what GameArts had to say about another Lunar. As you can see I e-mailed them not long before the PSP remake announcement by GungHo.

Oh god, I had seen this about Studio Alex on Wikipedia before!
But that's OK, all we need is to get Studio Alex together again, in this day and age anything can be done! Nearly anyone can make games with today's technology.
So once that's done, we can ask them to pretend it's 1995 and create a new LUN...
Wait wait, will we need GAMEARTS permission nao?!?!?!?!?!!??!?!?!?!?!?!?!

thats amazing thanks for letting or showing me that i think there still might be a little glimmer of hopee..hahaa
Top

I had a sudden urge to dust LunarNET off and have a look-see, and I'm glad I did. Well ... sort of glad. This does explain a lot, but it truly is depressing. Dragon Song makes more sense now. At the same time I suddenly realize that the Lunar magic probably died with Studio Alex and as such I'm not so sure I want a Lunar 3 anymore. Would it still be Lunar? Dragon Song sure wasn't ...

Lots of Lunar news today. I found this out at the same time I heard about the PSP port.