Wanted to show off my almost complete collection. They had to be CIB. Cart/disc only wasn't going to do. I'm going for a copy of every Lunar game made for every system. The only 4 games not shown are:

All the Playstation versions (Demo disc is sealed)

My most coveted versions, Sega CD

All the Japanese Sega Saturn copies

Once I get the three mentioned in the beginning the only other copy I need is the PC version to have a 100% complete collection. I also have the Lunar 2 demo that is included in Vanguard Bandits, but I didn't take photo of it.
Top

Is there a reason you're not counting the *Japanese* PC version of SSS toward your 100%? And of course you already know that there's both the regular and LE Korean version, since you seem to be going for all boxed releases. Also, if you're going for uniqueness in packaging you should probably also have a first-printing TSS copy, since the manual and box liner for the first press didn't have foil.

I should find the photo I took, gah, over ten years ago of all of the console game discs. Though I didn't include the Best versions as redundant, and didn't have the PC games yet then. And, of course, I need to take one with the portable games, but the point of the photo was to showcase the disc art variants specifically, since I have them all. And manual/packaging/pack-ins for all except one copy of TSS -- though I also have a review copy of TSS that does have its own box/liner/manual, but not foiled, so I have the right number of boxes. I wonder if I should bother trying to get a box/liner/manual only for that one. Poor little Disc Art 2, in a plain jewel case...

I didn't buy a separate non-premium version of SSH (NA) because it's entirely a subset of the premium, so it would just be duplication. I believe it was also a download-only release in Europe, and I keep forgetting to check into that and see if it's in any way different from the US download.

And, of course, Silver Star Story Touch for iOS doesn't have physical media. It's on my iDevices, though. Likewise, the NA and Japanese SSH demos are on my PSP (and worth having because having them gives you a quite good early-game weapon for Luna in the full version).

Hey, I found the disc art photo. Taken June 30, 2005. Forgot it has the Making Of discs in it too. Not the soundtracks, though, because I intended to take a separate photo of all of the soundtracks and never did. 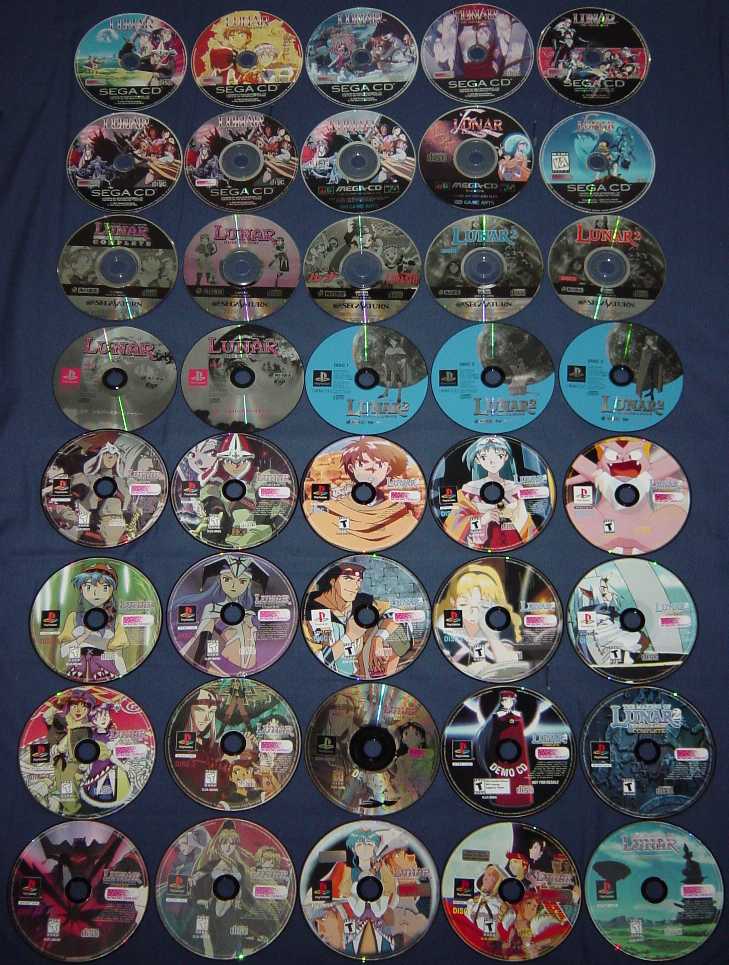 Impressive. I don't even want to fathom what it costs nowadays to get CIB copies of LUNAR, especially the Sega CD versions (I'm staring at my $5 paid for Silver Star CIB back near 20 years ago...).

Yeah the PC version of Silver Star Story would be impressive if you could get it CIB. I don't know how well the Japanese are about retaining PC game boxes but up until a little after the turn of the 21st century PC games were in gigantic boxes and I believe SSS on the PC was in a sizeable box also. I along with a lot of people discarded PC game boxes and kept just manuals and jewel cases. That would be very impressive to a LUNAR collection to have the PC game CIB
Top

No. The Japanese box is closer to the size of a DVD box, though a little thicker. Maybe about the thickness of a (US) SCD game box. It's plastic, btw.
Top

No. The Japanese box is closer to the size of a DVD box, though a little thicker. Maybe about the thickness of a (US) SCD game box. It's plastic, btw.

To give you an idea, the images under the "PC" version here:
http://lunar-net.com/sssc/packaging.php
for the box (on the left/right of the disc) are the size of the covers. The packaging was (...disappointingly...) bare-bones, with just the box, cover, and disc. Uh, and manual I think.

BTW I never even got hold of the South Korean version {^^}. That is a challenge.

Most of the images of the packaging on the site are also from my own collection if anyone's curious, with a handful of exceptions. KF
~Kizyr