Hi all! I wasn't sure if this was suppose to go in the arts section or not, but I thought I'd share some of the wedding photos I've been sent by friends and family so far

They can be found at:

There are a few random pics in there but the majority of the wedding photos are together.

I can't get in. It asks for a password. ^_^ I think it's linking to your private account?
Sonic# 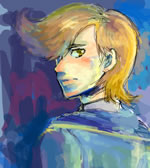 <3 for PGJ!!!
"Even if I close my eyes the world will not disappear." -- Mathiu Silverberg, Suikoden I
Top

Wow, thanks for sharing these! They're really nice- you look lovely in your wedding dress, as well. I'm glad you had a good wedding.
Top

Nice pictures, though. I enjoyed looking at them.
Top

You are beautiful, milady!!!
Congratulations, again!
"Even if I close my eyes the world will not disappear." -- Mathiu Silverberg, Suikoden I
Top

I finally got a chance to look. Looks like you had a great time! ^_^

One thing that startled me is that I see several features of mine in you. My hair is about the same color, length, and degree of wave (though I had it curled in my wedding), and your forehead is nearly as high as mine. My part is on the other side, as is my dimple. Our faces are different, but I could totally pass off a shot of you from the back for me, and untitled-2.jpg really reminds me of some of mine. I haven't gotten a gallery together yet, but you'll have to see if you agree when I do.

(Sorry if all that sounded self-centered; I've been looking at rather a lot of photo proofs lately so my appearance is very much on my mind.) Actually, when I do, can I include that one of you I mentioned, just for fun? (I'm planning on including a photo from my prom for comparison already.)

You look lovely! As I was looking through them I recall thinking "I can't believe how tall he is!" Wow. Wonderful pictures.... (the cake was really pretty... I am in awe.)

You play Guild Wars?? AH! So do I! Mayhaps we should meet up in game?
<a href="http://photobucket.com" target="_blank"><img src="http://img.photobucket.com/albums/v295/YoshiMars/nashmiabanner.jpg" border="0" alt="Photobucket - Video and Image Hosting"></a>
Top

Wow *^^* Thanks for all of the replies everyone!

LOL, yeah that one of me with the red eyes... my friend called that one "Devil Danni" xD I had red eyes in ALL of my pictures x| That really sucks, but I think some of them were pretty nice

Alun, sure you can use whatever pics you want

I'd love to see your gallery too! I swear, mine went by so fast... I was SO nervous! Everything was going great, we were sort of late but my sister-in-law was driving like a mad woman screaming out the car window for people to get out of the way, then I'm in the dress and it's 4:45 and no officiant (wedding was supposed to start at 4:30!) and then I'm getting some pre-ceremony pics done with the photographer and everyone is pacing and I'm pacing ... or pacing in my mind because at that point I couldn't really pace in my dress ^^; Also, I didn't get to have an outdoor ceremony because it rained

sucky... but, it actually didn't hurt me that much I think I knew it was gonna happen, but really when it came down to it, I was just so happy to be getting married that it really didn't matter... Although it was so funny because nobody in the attending party really knew what to do... the rehersal was pretty much a joke... and it was outside and they didn't show us where and what we'd have to do inside if it rained ^^; Oh... and that's another thing, the wedding that was scheduled AFTER mine got to have the ceremony outside, it stopped raining after they set everything up inside for mine :p I don't know how they managed to cram all 110 people into that tiny room but they did, quite a few people were standing. But yea, then it was all a blur especially after I looked at Brian (weee I know, that sounds so mushy xD )... but it's true *dreamy sigh* haha

Anyways, I plan on trying to do a nice write up of everything at some point, before I forget (I hate you my wretched memory! Curse you!) and just for anyone who is interested.... I swear the end of the reception almost had me in tears, it was the best ending I could've ever dreamed of... it was like somethin' awesome out of an 80s movie, so cliche, but awesome at the same time xD

Oh, and before I forget, I added my honeymoon pics to my photobucket account. I changed the account options so guests can just put a password (instead of having to log in) to take a look, I made it "Lunar". ^_^

How wonderful!!! ^0^ Once again, congratulations!

Looks like you had fun in Japan, the pictures are amazing! And you look too gorgeous in your wedding gown, so lovely! ^_^ I'm glad you had a beautiful wedding. Thank you for sharing Danni, I'm so happy for you! *hugs*

Do we get to see any of Alunissage's wedding pictures sometime? <3

I just skimmed over a couple of pictures, all from Akih... whatever the name is. Such a colorful city, are all of Japan's cities that colorful?

Users browsing this forum: No registered users and 19 guests