New users, post your introduction to the forums here here!
Posters leaving for or returning after an extended period of time, feel free to post here as well!
Post Reply
10 posts • Page 1 of 1 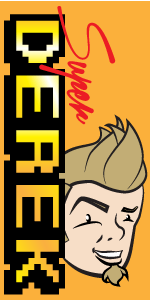 I'm pretty new around here so I thought I'd do the obligatory thing and introduce myself!

I've been a fan of Lunar for... well probably a little over a year now? A room-mate of mine introduced me to the series in the summer of 2012 with Lunar: The Silver Star Story Complete on PS1. I played through it and had a blast. I don't think another game has had the emotional impact on me that SSSC did.

Last summer I started making game reviews on a small YouTube channel of mine, and reviewed a few games, and always wanted to review Lunar, but since I didn't have access to the game anymore, I had to save up some cash to acquire it. I wanted to save up to get a complete copy of the 4-disc version, and I eventually got it. I played through it again, and it was even more intense this time around because I already knew what was going to happen, made it even more dramatic. Weird, huh?

Anyway, I finished up my review, and put it out there! A viewer left a comment asking if I was a part of the Lunar-Net community. I actually had no idea there was a community, but it totally makes sense that there would be! So after hearing about it of course I had to come check it out! So, here I am!

I'll see you around!

Welcome! It's awesome to see people playing the older releases for the first time now.

Have you played Lunar 2, or any of the other versions of Lunar 1?
Top

So far, I have played through Lunar 1 and Lunar 2 for PSX, but haven't played through any other releases so far, but I have heard that I really need to check out the Sega CD releases. I've got a Sega CD, and I'm contemplating burning a copy of the games, but I'm kind of a purist, so I'll probably have to play them when I can afford to buy them.

Weren't you in a video on the Game Quest? You were pretty awesome in that video. I've been meaning to subscribe to your channel and check out your videos! I'm going to go do that now.

And yeah, I second trying to play the original Sega CD versions (mostly TSS -- the changes between TSS/SSS were much more substantial than the ones between EB/EBC). The music was even better in most cases. KF
~Kizyr

Dark_Fairy wrote:Weren't you in a video on the Game Quest? You were pretty awesome in that video. I've been meaning to subscribe to your channel and check out your videos! I'm going to go do that now.

Yep, that was me! I had a blast on that episode too, can't wait to go game hunting against Wood again.

I'll take your advice guys and try out the Sega CD versions. By the way, has anybody played the prequels on Game Gear or the Sega Saturn? Are those any good, and are there translation patches available for those? I'm kind of intrigued...

I've played the Game Gear version. It's been YEARS since I've played it though and I honestly don't remember much about it. It wasn't on the same level as Lunar 1 and Lunar 2 from what I remember, but it was alright. I know little about the Saturn version other than what I've read here on Lunar-Net, you might want to either let someone chime in who knows more about it, or look here: http://www.lunar-net.com/ms/

SuperDerek wrote:I'll take your advice guys and try out the Sega CD versions. By the way, has anybody played the prequels on Game Gear or the Sega Saturn? Are those any good, and are there translation patches available for those? I'm kind of intrigued...

Yep, I've played both of them (well... naturally given that I wrote the walkthroughs for both games).

For your first question, if they're worth it... kind of. They're radically different games.
For your second question... There is a translation patch for Walking School (link: http://www.romhacking.net/translations/1454/). However, there is no translation patch available for Magical School Lunar!. My walkthroughs have full storyline explanations and many dialogue translations -- especially for MSL! -- so you can still understand what's going on, but not everyone is up for playing a game that requires referring to an off-screen guide. KF
~Kizyr

Wow, you are one rad dude, Kizyr! I haven't yet tried playing a game with an off-screen guide, but if it's as good as you say it is, (I can stand tedium,) then I must get a copy.... Soon as I get a Saturn, at least.

Thanks very much for your response, and especially for the service you've provided to us Lunar fans.

Welcome to the board SuperDerek! I don't have much else to say - busy week.

"Just as you touch the energy of every life form you meet, so, too, will will their energy strengthen you. Fail to live up to your potential, and you will never win. " --- The Old Man at the End of Time
Top
Post Reply
10 posts • Page 1 of 1

Users browsing this forum: No registered users and 18 guests