Your general gaming entertainment thread.
From Mario to Sonic, Zelda to Final Fantasy. Talk about it here.
Post Reply
1 post • Page 1 of 1 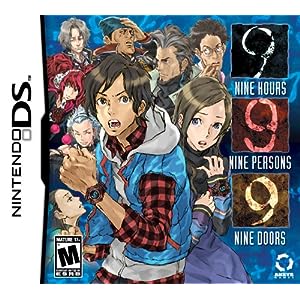 9 Hours, 9 Persons, 9 Doors (shortened to 999 from here on out) is a visual novel developed by Chun Soft and translated by Akysys. The game consists of story and puzzles, but mostly story. The exploration/puzzle solving is done ala games like Myst, except these are actually solvable and generally make more sense.

The story centers around Junpei, a college student who suddenly finds himself on a flooding ship with no idea how he got there, and why he's wearing a wristwatch-like device with a giant "5" on it. After solving a tutorial puzzle to escape the flooding room he's in, he finds 8 other people who are also trapped with him and wearing similar wristwatches, including one Akane Kurashiki, his childhood friend/crush. After running into these people and failing to find an exit from the ship, they hear a voice from an intercom identifying himself as "Zero". He explains they're going to participate in the "Nonary Game", with the reward being their escaping the sinking vessel. They will have 9 hours to complete the game, seeking a door with the number 9 on it. If they can find it and escape, they win. If they fail, they'll sink with the ship. Also, there are rules they must follow, and not following these rules will result in... dire consequences. I won't spoil exactly what that is, but I'm guessing you can figure the gist of it out.

I bought this game out of curiosity/GAF hype, and was instantly hooked until I completed every scenario. I lent the game to my older sister, who ended up having the same addiction as me. The story is incredibly engrossing, and probably one of the greatest uses of multiple endings you'll ever see in a videogame. Endings are determined by which doors you chose to enter during the game. There are technically six in total, though honestly I say there are five endings, as one ending is just the True ending cut incredibly short because you didn't complete the Normal ending first. So there's the True ending, the Normal ending, and 3 Bad endings. The bad endings are worth seeing though, as they can not only be super chilling, they give some information you won't get in the Normal/True endings, and it's kind of cool when playing the Normal/True endings how you see things that WOULD have been the Bad ending if you had made different choices. It's VERY cool! ^_^

Now, something to emphasize. This is a visual novel, not a dating sim. Also, emphasis on NOVEL. You'll spend the majority of the time reading. However, repeat playthroughs are made significantly easier by virtue of the fact that you can fast-forward through text you've already read by holding the D-Pad right. So each repeat playthrough will get shorter and shorter until you finally tackle the True ending, which is significantly longer than the other scenarios (though those are plenty long as well).

The puzzles are the point and click through a CG rendered environment ala Myst. Things you select are highlighted in yellow so you know what you're clicking on. There's no pixel hunting to be found here. Additionally, with the exception of maybe 1 or 2 puzzles I solved via luck, none of the puzzles in this game are obtuse making no sense whatsoever.

But what really sells it, is the story. The characters are really awesome, and the localization is really really solid. The multiple paths in the game really make sense as you uncover the mysteries surrounding the Nonary Game, and there's a real sense of tension as you progress, like a thrilling page-turner you can't put down.

If a great suspense story is your thing, I cannot recommend this game enough! Hunt a copy down, because in my opinion, it's really worth it! ^_^
-Nobi
Top
Post Reply
1 post • Page 1 of 1