Your general gaming entertainment thread.
From Mario to Sonic, Zelda to Final Fantasy. Talk about it here.
Post Reply
2 posts • Page 1 of 1

I recently played through the game Live-A-Live as a birthday gift for my friend and I found myself stuck at a roadblock with two bosses in particular for which, I discovered to my woe, there are no strategies for defeating online. That ends today, because I beat them and I'm going to tell anyone who reads this thread how to beat them too! My hope is that this thread will show up in Google searches for people in the future so fewer, if any, people who decide to play this game suffer as I have.

Obviously, this guide would be way more effective on like GameFAQs or something but I have never needed, nor wanted for, a GameFAQs account until today. And the message boards for this game are karma locked, and the site refuses to upload any FAQ I write. Which means I'm gonna have to wait a few weeks before I post up this guide anywhere else. Basically I'm posting it here so it's on the internet SOMEWHERE and also so I can copy and paste it later when I've proven myself to GameFAQs.

ANYWAY,
(Note: These boss names and ability names are based on the current language patch of the game which is very good.)

Gynephobia is the second-to-last boss in the Fantasy chapter of the game, the fight begins when the Hero approaches the door. Gynephobia has very annoying status attacks and powerful nonsense and requires you to stand in very specific locations to not get owned. You're gonna either need to memorize her attack patterns or play hot-and-cold/battleship with her via savestates while spamming hexaflange and healing as needed. Good luck!

Pure Odio is the very final boss and I hate them. There doesn't appear to be anywhere you can stand where Pure Odio cannot make you regret it so you just have to position yourself in a way that minimizes the harm this boss can do. In the first phase, do not target the winged thing at the top of the screen if you can avoid it and kill everything but one eye. Then use this time to move into the bottom right corner of the screen because positioning is everything this battle.
Step 1: Defeat all but one eyeball. 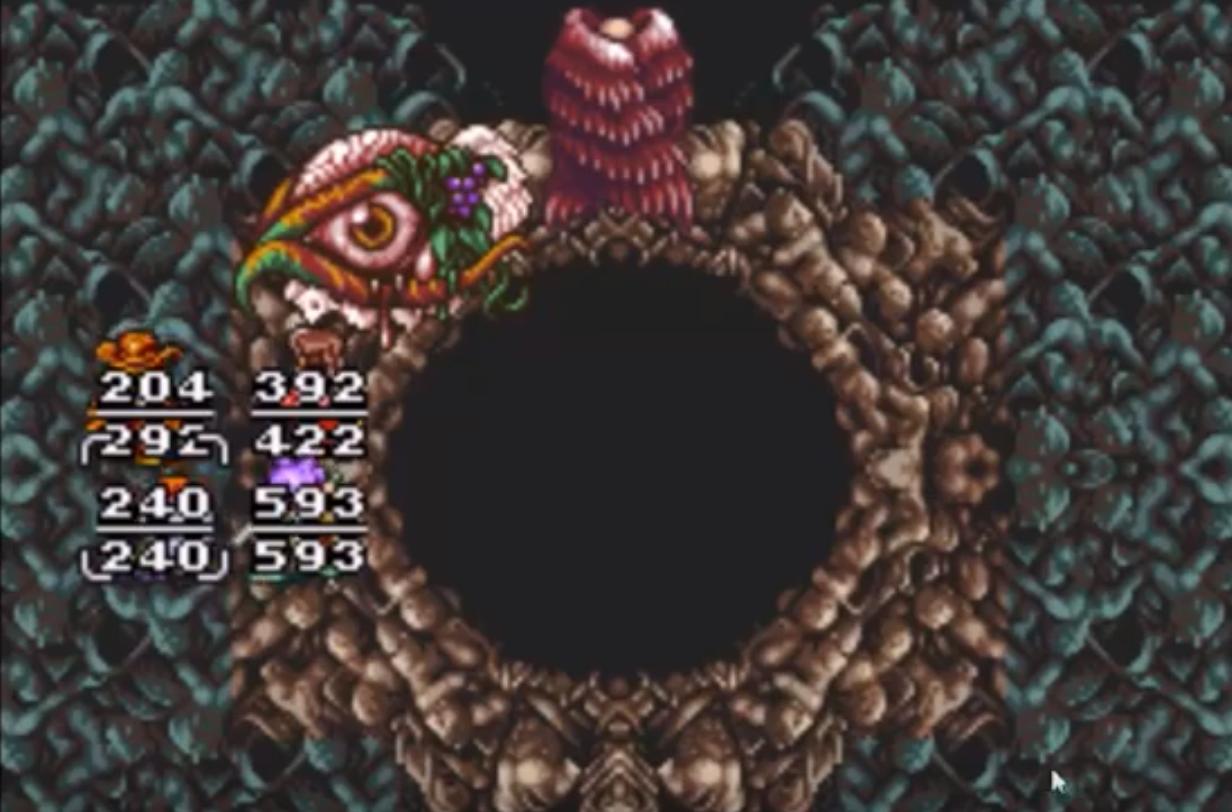 Step 2: Get in the bottom right corner. 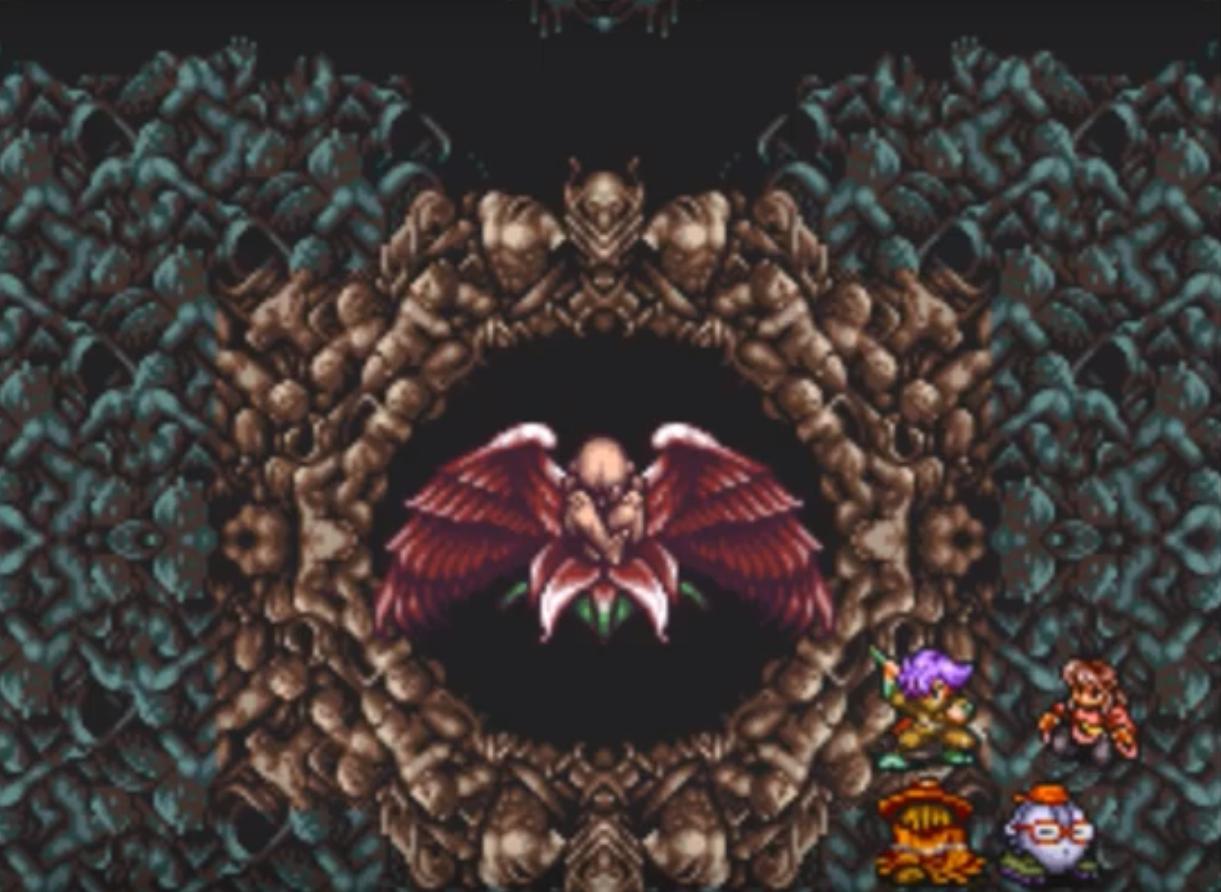 (BTW, the cowboy from the western scenario and the robot from the sci-fi scenario are absolutely mandatory for this fight AND THE COWBOY MUST BE AT LEAST LEVEL 16 SO HE KNOWS HURRICANE SHOT. You can take pretty much anyone else you want into this fight. Though I recommend the ninja and the kung-fu master)

Once you are huddled in the bottom right corner with your team (the robot positioned where they can heal everyone with their AOE heal) you want to make sure you are not directly diagonal from this boss and then you want to move one character that is neither the cowboy nor the robot up about 4 places up the right hand side of the map then you want to have your other three characters in a V shape with one character up against the boss, the robot down and to the right of that character, and then the cowboy directly below and to the left of the robot. 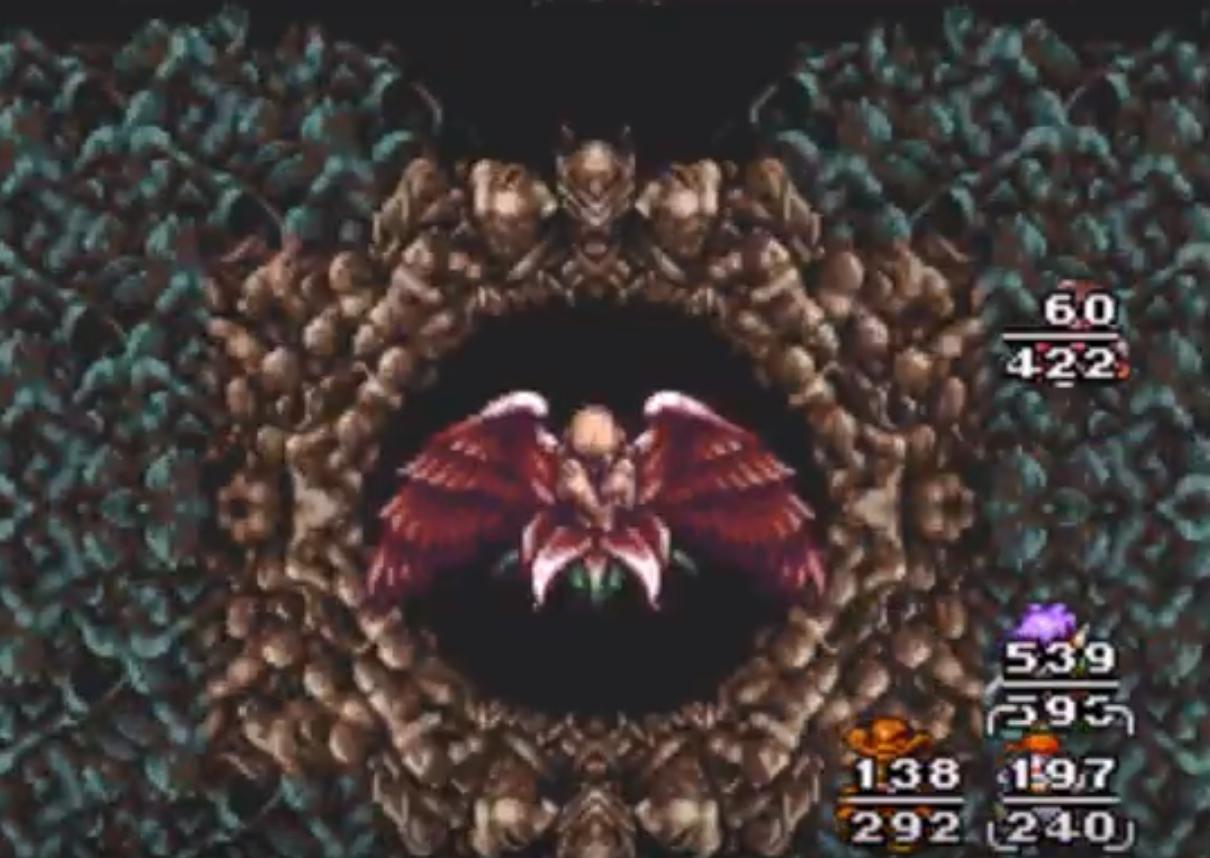 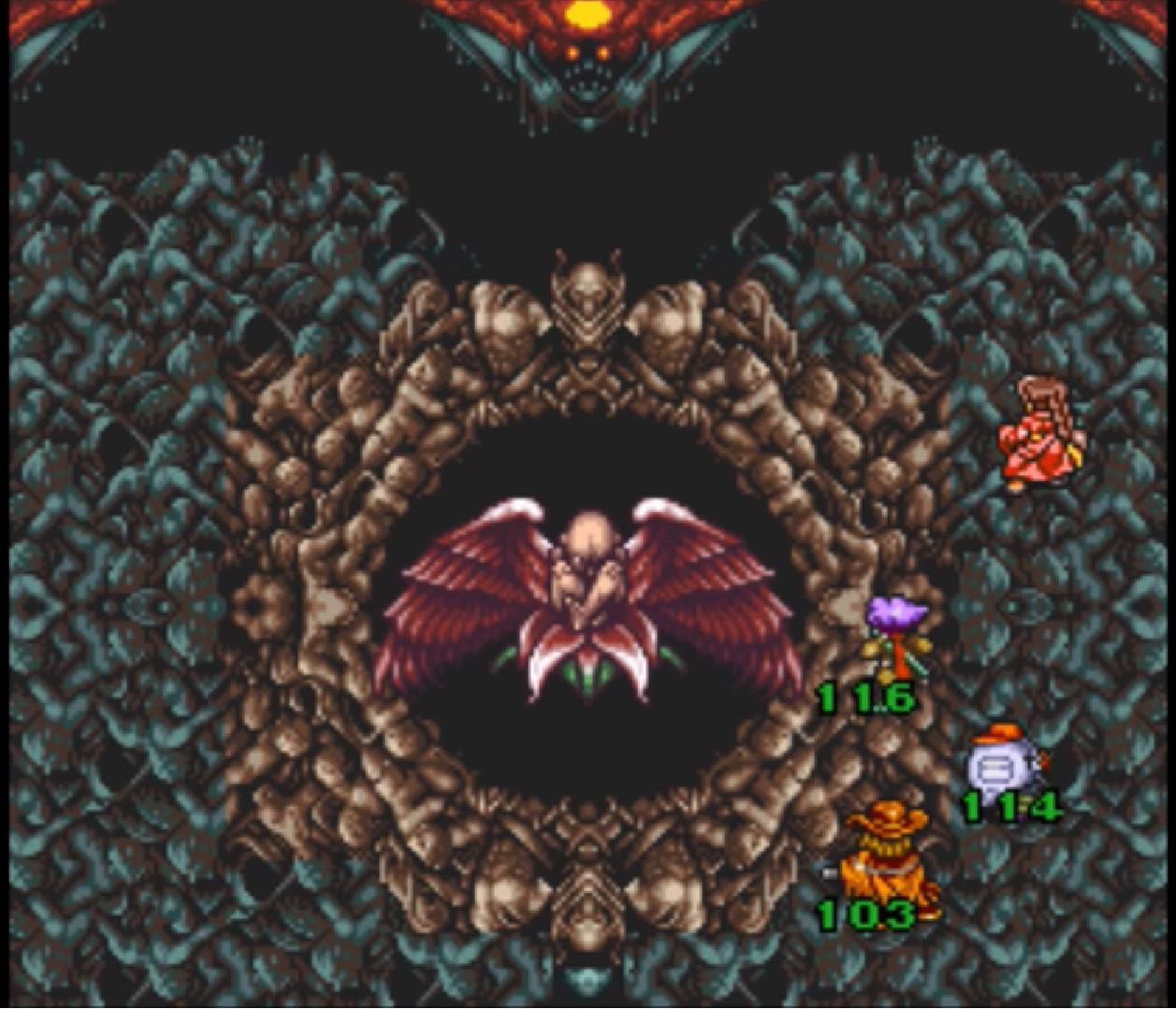 Spam hurricane shot and the AOE heal and pray. You WILL probably need to use a few healing items (the scroll, the peach bun, the huge meat, and the potion #9) even using this strategy and you will also probably need to use savestates because this boss is unfriendly. GOOD LUCK.

BTW you could technically have the spare not-cowboy and not-robot character directly northwest of the other character that's standing away from the rest because then they wouldn't be in any of the locations where Pure Odio can hit them with their very annoying Saint Alicia attack. 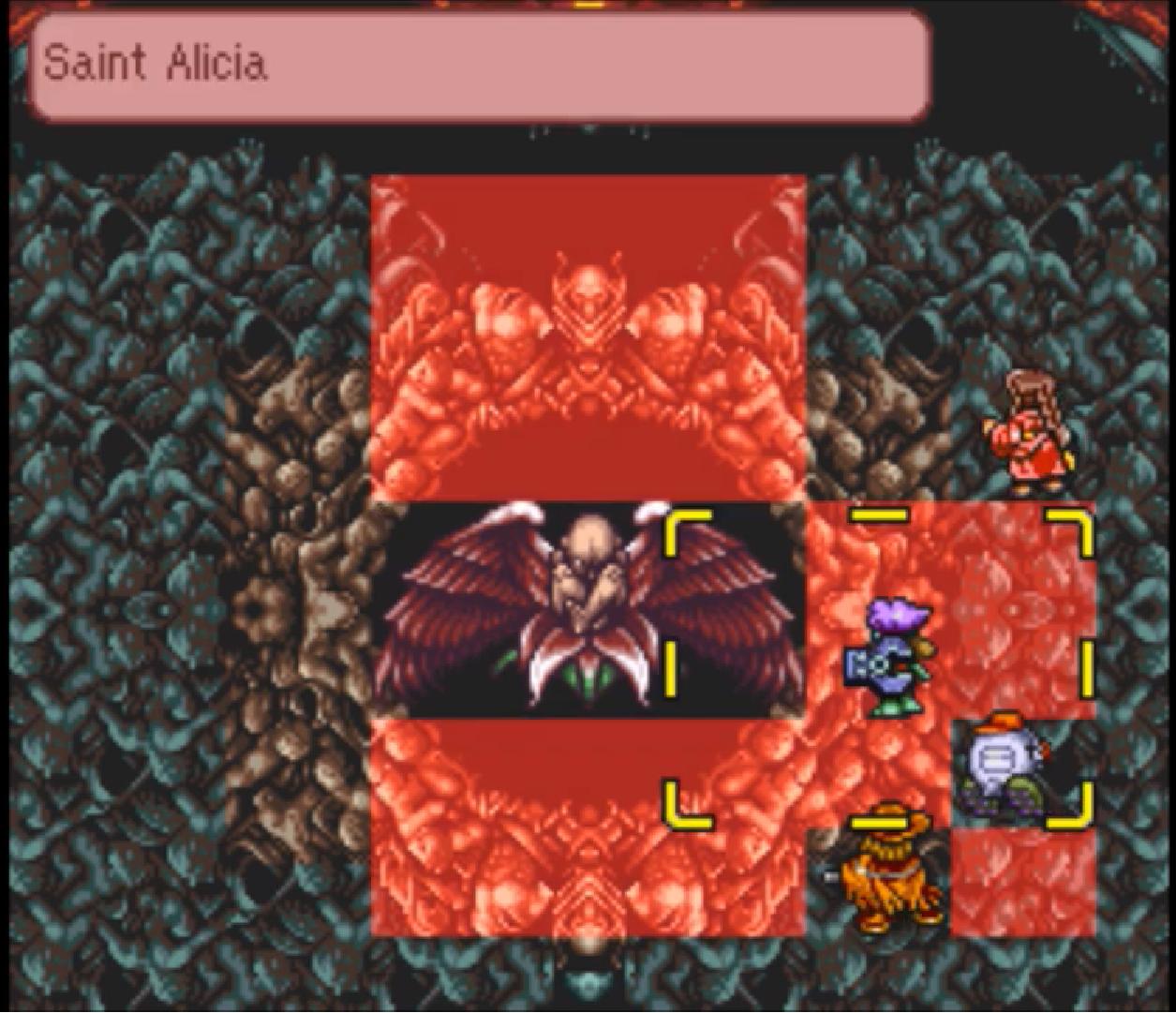 (Also pictured, me getting my butt handed to me.)

The problem with positioning your characters like this is that I'm not sure if it would make the fight easier as then all Pure Odio would be able to do is spam Cancel Ray and you'd be forced to whittle him down with charge-free attacks (which would take a very long time) vs blow him away with hurricane shot (which is way faster) but feel free to try that for yourself!

Here's a 20 minute video of me experimenting with and learning how to beat this boss. The recording begins at the moment I get it to just one eye in the first phase. I still use quite a few savestates in order to win and I commend anyone who has ever beaten this game on console or without using savestates because that is freaking impressive. This game has moments that are very hard, especially this boss.

Video Evidence That I Did, In Fact, Beat This Boss

I had a lot of fun playing this game, despite all the difficulty and frustrating moments and if you ever feel like playing a challenging game that's actually many games in one then you should give Live-A-Live a shot. Feel free to use this thread to discuss this game!
The Infamous Jenner!
Maker of Lists.
RIP Coley...

Re: If you are struggling with the Gynephobia and Pure Odio bosses in Live-A-Live I have a solution

Thanks for the tips! I did a test run against the final boss, died, did some grinding in the character dungeons...and then never went back for a rematch. This is a unique and noteworthy game and I really should see it through to the end.

Which chapter did you like best? I have to give a lot of props to prehistoric, but I really enjoyed sci-fi.
「まあいいけど。」
Top
Post Reply
2 posts • Page 1 of 1