Your general gaming entertainment thread.
From Mario to Sonic, Zelda to Final Fantasy. Talk about it here.
Post Reply
8 posts • Page 1 of 1

Anybody else absolutely obsessed with these games? I know I am.

I've beaten both games twice with Light & Dark males. I'm going through the first one with a Light female currently.

Canderous/Mandalore is the man.
Top

KOTOR 1 was much better then the 2nd. The 2nd KOTOR had many glitches and felt really old. It was the same style of combat and stuff.
"It's better to keep your mouth shut and let people think you're dumb than to speak and remove all doubt."

I liked the first one(darkside all the way!). However I'm not obsessed with them. I havent played part 2 yet. It' wasnt even made by the same people so I wouldnt be suprised if it wasnt as good.

I like KOTOR II a little better than the first. I liked the fact that you could train party members to become Jedi.
Top 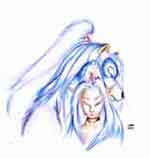 I finally played KotOR over the last few weeks or so. I do have to say I did enjoy it, overall, as a game. There was slight disappointment, though, and I was expecting a little more out of a game that everyone was raving about. (I call this the FFVII factor, but that's jsut me).
Top

All I had was the second, and it actully wasn't too bad the few days I was playing it.
"I could never fight without my clothes on...I'd keep tripping over my sword. Heh heh heh....." -Kyle
Top

I think I've developed an addiction to the first KOTOR.

If you had asked me about KOTOR a few weeks ago, I would have told you that the constant load times and confusing (to me) battle system drove me away. I picked it up again a week or so ago and the game "clicked" with me. I'd stopped in the middle of the first planet, which I simpy didn't enjoy much at first. When I resumed playing however, I began to genuinely enjoy exploring Taris, in part because I realized how many gameplay choices I had.

I love that the player has a large degree of freedom and that actions actually have consequences.The only game I've ever played that had a comparable structure was Deus Ex. And Deus Ex, though a great game, lacks Wookiees.

Another great aspect of KOTOR is that Bioware allows the player to do pretty much everything that a viewer of the Star Wars films would ever want to do: I play a Light Side Jedi who wields two lightsabers (green and blue) and occasionally uses Force Lightning. My Jedi travels around with a Twi'lek, a Wookiee, a Mandalorian, and a droid. The player actually feels as if they are inhabiting a Star Wars movie.

Though I hear it's not as good as the first game, I think I'm definitely going to buy KOTOR II in the near future.
Top

I went out and bought both games the day they came out because I had heard so much about them. The first KotOR was an awesome game that I couldnt put down the entire time, the second on the other hand was the exact same thing in terms of game play. In fact, it was more of an expansion pack for the game than anything else really since it used the same graphics, engine and nearly everything else and just simply added a few new characters and planets to play through. I couldnt stand to get past the second or so planet in KotOR II.
Top
Post Reply
8 posts • Page 1 of 1