For discussion of Lunar: The Silver Star, the original game for the Sega CD
Post Reply
12 posts • Page 1 of 1

I'm picking up a long-backburnered project of mine which involves reviewing and formatting all of the TSS text. I've only looked at Caldor Isle and the Katarina Zone so far, but I wanted to share a few tidbits.

First, here are a few lines that almost certainly never appear in the game:
"THE BRIDGE ACROSS THE RIVER
HAS BEEN WASHED OUT.

I WAS TOLD THAT THE LOGGER
NEAR THE RIVER WAS SUPPOSED
TO FIX IT, BUT HE DOESN'T

SEEM VERY ANXIOUS TO GET IT
DONE. I'M BEGINNING TO THINK
HE'S MENTAL OR SOMETHING..."

I think probably a flag setting got messed up and this was supposed to be the first thing he says after the party tries to sell the Diamond to the item shop, but only the lines after these (which say nearly the same thing) show up.

(Burg weapon shop)
"THIS MIRROR SEEMS TO BE
PIERCING MY SOUL!

HERE, TAKE IT BACK...
KEEP THAT THING AWAY
FROM ME!"

(Burg item shop)
"THIS MIRROR SEEMS AS IF
IT'S DRAWING MY SOUL IN...

(Saith shop)
"THIS MIRROR SEEMS AS IF
IT'S DRAWING MY SOUL IN...

I'M AFRAID OF SPOOKS,
SO I REALLY DON'T WANT
SOMETHING LIKE THIS!"

You can't get to Caldor Isle while the Mirror is in your possession, so this text will never be displayed. Other shops have comparable dialogue, though, so it's not a huge loss. Selling any event item anywhere gets some sort of snarky comeback, as you probably already knew. Sometimes it's short and/or repetitive, other times...not.

(Meribia weapon shop)
"OH MY! THESE ARE WONDERFUL!
DRAGON'S WINGS! HOW DO YOU
USE THEM?...LET ME GUESS:

YOU THROW THEM AT THE ENEMY
AND FLAP THEM TO DEATH!..NO?

I'VE GOT IT! YOU HURL
THEM AT YOUR ENEMY

USING THE TALONS ON THE
END TO SLASH THEM! NO?

DO YOU PLUCK THE SCALES AND
DIP THEM IN POISON TO MAKE
BLOWGUN AMMO?!...NO?

So far I've found some of the most entertaining item-selling text to be in Vane. I'm not sure which shop this is, though:

"A SHIELD LIKE THIS CANNOT
BE MADE BY HUMAN HANDS
ALONE! I CAN'T AFFORD IT."
(Nall)
"ALEX, LUNA WILL SHRIVEL UP
AND DIE IF YOU DON'T RESCUE
HER! YOU NEED THIS SHIELD!"

"THIS HELMET HAS WORKMANSHIP
I'VE NOT SEEN IN YEARS!
IT'S FAR TOO VALUABLE..."
(Nall)
"IF YOU SELL THIS, THERE WILL
BE NO CHANCE OF SAVING LUNA!
IS THAT WHAT YOU WANT? HMM?"

"ARMOR SUCH AS THIS WOULD
FETCH MORE MONEY THAN IS
IN THE ENTIRE CITY!"
(Nall)
"THEN YOU CAN BUY A NICE
TOMBSTONE FOR LUNA'S GRAVE
WHEN YOU CAN'T SAVE HER!"

(Nall, presumably)
"DON'T SELL THE HERO'S CREST!
IT'S SO PRETTY...I WANT TO
LINE MY CAGE WITH IT!"

I really don't know what to make of that last one.

What else...well, as I mentioned in another thread, only one Vane NPC seems to be aware of Nash's crush on Mia. The same NPC is also the only one who suggests Nash's magical talents may only be modest, and that's only relative to Mia, so I think in this game Nash is actually supposed to be as good of a student as he claims, unlike in SSSC. It's kind of nice to see someone actually rooting for him for once. Of course, his moral character is rather stronger in this game, if less nuanced.

"PSST...THIS IS JUST BETWEEN
US, BUT I THINK NASH IS IN
LOVE WITH MIA!

IT'S PRETTY SAD, THOUGH.

NASH IS ABRASIVE AND MIA IS
KIND AND SWEET.

MIA'S GOT TO BE IMPRESSED
WITH THE FACT THAT YOU'RE AN
APPRENTICE TO SAGE GHALEON!"

(later, when neither are in the party)
"I SAW THAT NASH AND MIA
WERE LOOKING FOR LEMIA
TOGETHER...

THAT'S SO CUTE! THEIR FIRST
DATE WAS LOOKING FOR HIS
CRAZY FUTURE MOTHER-IN-LAW."

(after Nash permanently joins the party)
"AH! NASH! SO, I HEAR THAT
YOU'RE HEADING OUT TO FIGHT
GHALEON WITH MIA...

I THINK YOU AND MIA MAKE
VERY NICE FIGHTING MATES, IF
YOU KNOW WHAT I MEAN..."

And, of course, so many pop refs. There are plenty I don't get because I'm oblivious, but even more that current players won't get because this is a 25-year-old game and some of the refs were pretty dated even in 1993. Like Ginsu knives. Of course, some have wrapped around and become oldies:

"IF YOU WANT TO PLAY WITH
THE BEST, YOU BETTER HAVE
A WAD OF CASH TO FLASH.

I bet approximately no one saw that in-game. As far as I can tell, it's what Brett tells you the second time you talk to him if you don't have enough cash to play blackjack with him in the sewers, which probably won't be the case considering that you'll likely be getting into battles on your way to find him.

I think Alex's father's dialogue changes more often, but I'd be surprised if anyone else's does.
Top

Ok that's it, I want a fanfic centered solely around the logger's wife. We need a name for her.

Huh? I thought I replied to this. Anyway, what I said is that Fulari is clearly the girl who ends up working in Ramus's shop, but we could call the logger's wife Kakar.
Top

Next bit of weirdness, not text related: This save I'm using is one that I also used to level Luna up to 52, so even though I had Alex running from these battles, he still ended up at level 23 before I ever got to Meribia. So I was wondering what would happen when his magic was unlocked, since normally he'd have 5 spells already by then. And the answer is: nothing, really; he only got Flame, as always. So I levelled him up, thinking maybe he'd get several spells then. Nope. He only got Power Litany, which is the second spell you get, and I think you always get it the first level you gain after getting magic. So now I'm like 4 spells behind (Little Litany, Flamer, Blazing Fire, Calm Litany, normally learned at levels 12, 14, 20, and 24 respectively). I wonder if he'll just get one spell per level for like the next five levels. Of course, since he's overlevelled, it's going to take that much longer to get them. I haven't written down what level I'm usually at at this point, but I usually have to do a little tiny bit of grinding before/during the Cave of Trial to get Flamer before fighting the Bronze Dogs, which otherwise tend to wipe you out if you only have Flamer, since they take two of that apiece = 8 rounds. So I think I'm usually about level 10-11 when getting to Meribia (I usually play enough on Caldor to get Luna to level 10 for her last spell, just for completeness).

That's not the only bit of weirdness I've seen. Some chests are already open before I get to them, which isn't usually the case, like these ones near Brett. You can see I still have Ramus in the party and can't even get to them yet. 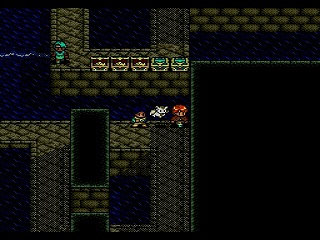 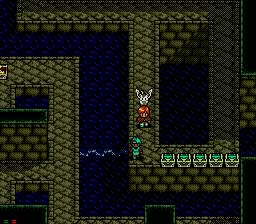 There was also an open chest in the room Dross is in (after the Water Dragon battle). I'll have to dig out my guide to see what's normally in these chests.
Top

Alunissage wrote:Huh? I thought I replied to this. Anyway, what I said is that Fulari is clearly the girl who ends up working in Ramus's shop, but we could call the logger's wife Kakar.

Just responding that this is brilliant. Word of Damon, I'm going to make it so: Fulari is the one who suddenly appears in Ramus's shop when it expands, and Kakar is the old lady in the logger's cabin. KF
~Kizyr

Just to follow up on my previous post, Alex did in fact gain one spell per level until he was caught up. Found this while idly levelling up Ramus a bit, which you can do even after defeating the Water Dragon and talking to Dross. I continue to find empty chests, namely one or two in the Cave of Trial and the one in the Library. Figuring out at what point that happens is probably going to be a pain.

Mel's text after you get money from Dross is slightly different depending on whether you talked to him after Dross stole the diamond, incidentally. I also feel like maybe talking to him was supposed to be a trigger to get Nash to invite you to study magic in Vane; if I ever play that far in the Japanese game I'll have to see if it acts any different.
Top

A couple days ago I was working out how to see all the text in Lann. It turns out to be a little complex, due to whether or not Jess is in the party. If you leave Lann, she leaves the party and waits for you in the Mayor's house (presumably so you can't take her to Nanza or any of the other places where people are talking about her). You need her to go to Lann Island, and before that she needs to terrify the boat owner into lending his boat so he gets out of the way. Also, Nash is optional for this quest, and his presence or absence changes a few lines. (Most amusingly, he brags to one of the female villagers that he'll take care of things.)

So if for some reason you really want to see all the possible dialogue in Lann that's available before going to the island, you need to do this (starting without Nash in your party):

Each one of these is different dialogue from previous.

ETA: forgot to note that three other NPCs have different dialogue when Jessica is in the party: the drunk just outside the mayor's house (prompting Jessica's rhetorical question, "Why is it that every RPG has to have at least one worthless drunk?"), the gross-minded kid at the bottom of the nearby stairs, and the kid in the eastmost house on the lowest level. I was mostly bemused by the micro-differences in the dialogue in the mayor's house.
Top

One line in Burg I've always thought was a little odd was this one, spoken by the man near the bridge:

THE WORLD IS NOT WHAT IT
USED TO BE! AND DYNE'S SHOES
WILL BE TOUGH TO FILL!

He says this after opening the basement chest, but it isn't dependent on whether or not Alex has equipped the clothes in the chest. Last night, while looking at sprites and screenshots, I finally noticed that Alex's sprite changes after opening that chest. 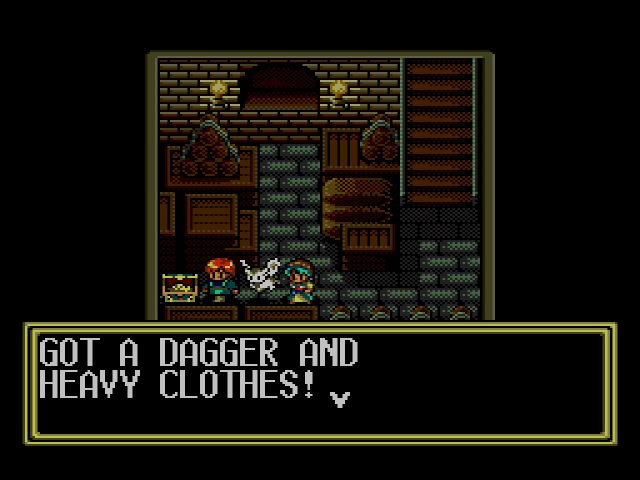 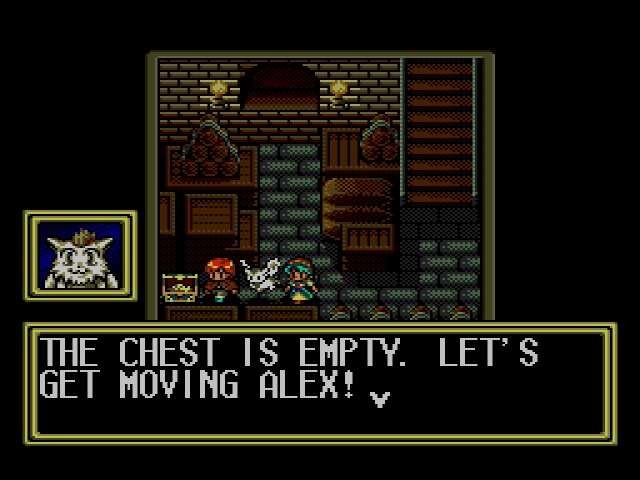 How many times have I played this game again...?
Top

So the idea is that Alex puts on the heavy clothes, which makes him an adventurer, and that's actually reflected by the in-game sprite and dialogue. That's pretty cool!
Sonic#

It's the little things, I swear, those little touches.
~Kizyr

His in-menu figure (e.g., when changing the order of the party) also changes -- and he's holding a sword after the change, as well as having the other clothes. His figure before opening the chest does not have the sword.
Top

- "Sometimes life smiles when it kicks you down. The trick is to smile back."
Top
Post Reply
12 posts • Page 1 of 1